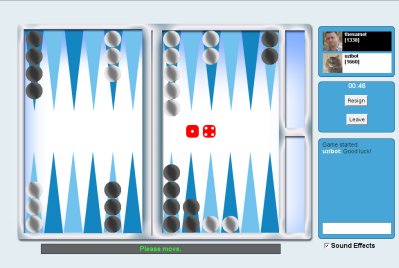 15Gammons is an online realtime backgammon website. Its backend is written entirely in Python using TurboGears and Twisted.

In fact, it is the first TurboGears project I’ve started (over 18 months ago); and the last one I ended… I finally had the time to give it the final touches and open it to the public.

Back in 2005 I learned, together with everyone else, that web browsers are capable of doing much more than they were originally designed to do. Javascript libraries were popping out every few days giving drag and drop and animation effects. Everyone were talking about AJAX. I couldn’t stop myself from starting to code a game using the latest tools at the time.

15Gammons utilizes the so-called Comet technique of streaming events to the browser over a long-lived HTTP connection for achieving low latency. The Comet part is written using Twisted. I am planning to share some useful code in a later post.

The user interface was written using the Script.aculo.us library. Flash is not required, but is optional if you like sound effects.

Check it out – play backgammon online in 15Gammons.com!

9 Responses to 15Gammons: Backgammon in TurboGears